Providing Food, and Community, For Veterans

Providing Food, and Community, For Veterans

Wayne visits his local food pantry, St. Margaret’s Center, on a monthly basis to supplement his limited diet with the foods he needs to be well. St. Margaret’s is one of the Los Angeles Regional Food Bank’s 600+ partner agencies and is able to serve hundreds of people just like Wayne because of the people who support our mission all year long.

Serving Those Who Served

Wayne is an approachable, soft-spoken man and a United States Veteran. One would never know by looking at him that he was homeless not too long ago. Now, he pays $615 rent for a 10 foot by 13-foot room, where he lives alone. Although he now has a roof over his head, things are still challenging. “After I pay rent, I have about $100,” he said. “$50 for food and $50 for everything else.”

St. Margaret’s Center helps hundreds of families and individuals facing the same dilemma as Wayne; once they pay their bills, not much is left over for food – especially nutritious food. He looks forward to taking public transportation to visit their pantry distribution every month, but not just for the groceries he receives. Wayne becomes emotional when talking about the staff and volunteers who tend to his needs. “Everybody here – they’re so good. You feel more like a human being.” 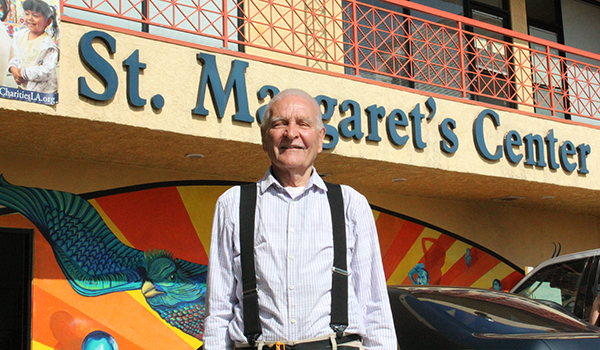 Because he has end-stage renal disease (ESRD) or kidney failure, Wayne is limited in what he can eat, but the volunteers and staff at the pantry know what to do. They work to accommodate everyone and even have posters on the pantry shelves outlining which food items are appropriate for people with various health concerns and illnesses. “They’re very attentive to my needs,” Wayne said. “I can’t imagine life without them.”

Wayne wishes he could volunteer at the pantry, but says he doesn’t have the energy to do so. He moves slowly and carefully and describes his body as “skeletal.” He truly wants to give back to this place that has given him so much, so he recently sent St. Margaret’s Center a letter expressing his wishes to leave them everything he has. “I have virtually no relatives left,” he said. “These are caring people, patient people. Just sweet, sweet souls.”

8.4 percent of the seniors in California are food insecure, which is higher than the national average but lower than the percentage of hungry seniors in our community, LA County. This is an urgent issue, as California’s over-65 population is expected to be 87 percent higher in 2030 than in 2012, an increase of more than 4 million people. Seniors are especially vulnerable to diet-related illnesses. Without consistent access to nutritious food may end up in hospitals because poor nutrition exacerbates illness and prevents healing. Unfortunately, many older adults are on fixed incomes and often have to choose between paying other bills to keep a roof over their heads and purchasing nutritious groceries, which are almost always more expensive than unhealthy, cheaper options.

Wayne is no longer homeless, but it remains a serious problem for many others. In some parts of California, seniors are the fastest-growing demographic of our homeless neighbors. In fact, in LA County alone, senior homelessness increased 22 percent in 2018. Pantry programs like those offered by so many of the Food Bank’s partner agencies are the difference between hunger and hope. When rent increases, especially for those on a fixed income like Wayne, food often becomes a discretionary expense. When the Food Bank can increase access to these vital resources, families and individuals have a greater ability to pay other bills. And for neighbors without a home, these programs can be the difference between life and death.

To those who already support the fight against hunger, Wayne is grateful. “On my behalf and certainly many many other people, thank you,” he said. “There are people who are healthy and able to function in the world who wouldn’t be if it wasn’t for St Margarets.”

The problems of hunger and food insecurity should not happen in our community, and our seniors deserve to age with dignity as well as access to the food they need to be healthy. Show your commitment to the fight against hunger today by making a monthly gift of $23 or more. Just $23 can feed a hungry neighbor for a whole month, and your recurring monthly gift helps that person indefinitely.