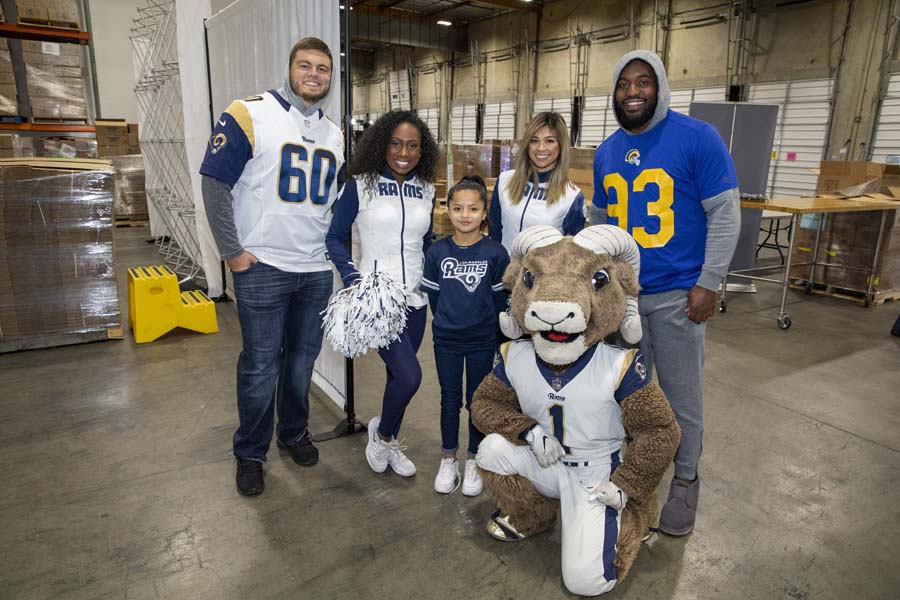 On Monday, December 23, the Los Angeles Rams celebrated their second annual Community Blitz Day of Service by distributing food at the Food Bank. At the event, they distributed Hormel Hams and other food items. The 2019 distribution marked the third annual Hams for Hunger event between Hormel and the Food Bank, and in that time, Hormel has donated more than 12,000 pounds of food to the Food Bank. Nationally, Hormel has donated more than 55,000 hams (a retail value of $1.1 million) to charities throughout the United States.

Throughout the afternoon, Rams players Nate Trewyn and Marquise Copeland, Cheerleaders, Rampage and volunteers packed food kits for more than 20,000 seniors who receive food from the Food Bank each month and helped distribute goodie bags filled with a ham and other holiday dishes for one thousand more families battling food insecurity.

“Access to nutritious foods is one of the biggest social determinants of health we’re addressing in Los Angeles and across the state,” said Meghan Newkirk, Vice President, UnitedHealthcare of California. “UnitedHealthcare is committed to investing in the communities we serve, and we are proud to continue our partnership with the Los Angeles Rams and the LA Regional Food Bank to address hunger-related issues and other social determinants of health in the region.”

“Every community is home to people that struggle daily with hunger,” said Laurie Raymundo, Marketing Director for Albertsons. “As one of the largest grocery retailers in Southern California, supporting hunger relief programs is a strong focus of ours and we were especially grateful during this holiday season to be able to provide to local families in need.”

The Los Angeles Rams remain active in the fight against hunger all year-round. In the fall, the Rams co-host the Taste of the Rams event: a culinary tasting even where fans can mingle with athletes and other members of the Rams organization. Since the first event four years ago, Taste of the Rams has raised more than $650,000 for the LA Regional Food Bank, which translates to the equivalent of roughly 2.5 million meals for our neighbors in need.

This year, the team and its community partners wanted to offer support during the holiday season as well. Other participating organizations were: UnitedHealthcare, Albertsons/Vons/Pavilions (AVP), Ahern and Hyundai.

“Although food insecurity is a year-round issue, this event happening during the holiday season is beneficial because children, seniors and families need food over the winter break,” said Roger Castle, Chief Operating Officer for the LA Regional Food Bank. “The Rams stepping up to do this during the holidays lets people in our community who are struggling with this issue know that there are people that care about them and it gives them hope.” 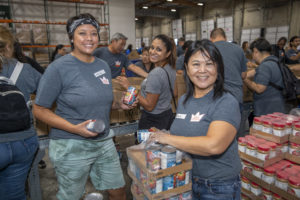 Learn more about corporate sponsorships, volunteer opportunities and other ways to get your company involved.