On September 9, 2020, the LA Regional Food Bank Provided Shelf-Stable Boxes, Protein Kits and Fresh Produce to Those in Need

Although the parking lot at SoFi Stadium isn’t yet full of parked cars, it was already put to good use. On September 9, drivers with popped trunks carefully navigated 10 lanes of boxed goods to gather nutritious food for themselves and their families. At this distribution alone, almost 2,300 families and an estimated 9,000 people received the help they need.

“Since returning to Los Angeles in 2016, the Rams have been partnering with the Food Bank to help provide access to food for Angelenos in need. To us, food insecurity is a social injustice. That is why we decided to fund distributions like the one today at SoFi Stadium feeding thousands of families that have been negatively impacted by the pandemic.  Community impact is a priority for the Rams, and as we prepare to open SoFi Stadium for football on Sunday, we wanted to first take care of our neighbors in need,” said Molly Higgins, Vice President, Community Affairs and Engagement for the Los Angeles Rams.

The Los Angeles Rams, a long-time supporter of the Food Bank, provided the location and volunteer support for this distribution. In March, the Rams hosted a virtual Te’LA’thon and raised more than $2.2 million to assist Southern California response efforts to the COVID-19 pandemic. All contributions benefitted United Way of Greater Los Angeles’ Pandemic Relief Fund in direct support of community partners and the LA Regional Food Bank. Rams team captains Jared Goff and Andrew Whitworth each donated $250K to finance a total of 2 million meals for Angelenos in need. Additionally, the team’s Annual Taste of the Rams event benefitting the LA Regional Food Bank has raised roughly $650,000 since 2016, providing enough for the Food Bank to distribute more than 2.5 million meals to combat hunger in Los Angeles.

Related story: See how the LA Rams and ABC7 Te’LA’thon raised $2.2M for the Food Bank >

Since the outbreak of the Coronavirus, the Food Bank has hosted more than 120 emergency drive-thru food distributions, each one reaching between 1,000 and 7,560 families. The Food Bank’s distribution numbers have increased by roughly 125% compared to the pre-pandemic period. During normal times, the Food Bank reached 300,000 people each month, but since the economic crisis, the number of people served has increased markedly and is now estimated to be at least 900,000 people served over the course of a month.

Fortunately, thanks to our community’s generosity, the Los Angeles Regional Food Bank has been able to help those in need. Corporations, individuals and others have visited LAFoodBank.org/donate to make sure our critical work can continue.

Michael Flood, President and CEO of the Los Angeles Regional Food Bank, commented, “Thank you to the Los Angeles Rams and SoFi Stadium for making today’s distribution possible. People are hurting out there, and it takes all of us coming together as a community to help one another.”

The Food Bank is a non-profit organization with top rantings on Charity Navigator, Guide Star and others. As a highly efficient organization, roughly 97% of the funds donated are reinvested into the community, and every $1 provides the equivalent of 4 meals.

The Food Bank relies on the generosity of the community. Please consider donating today. 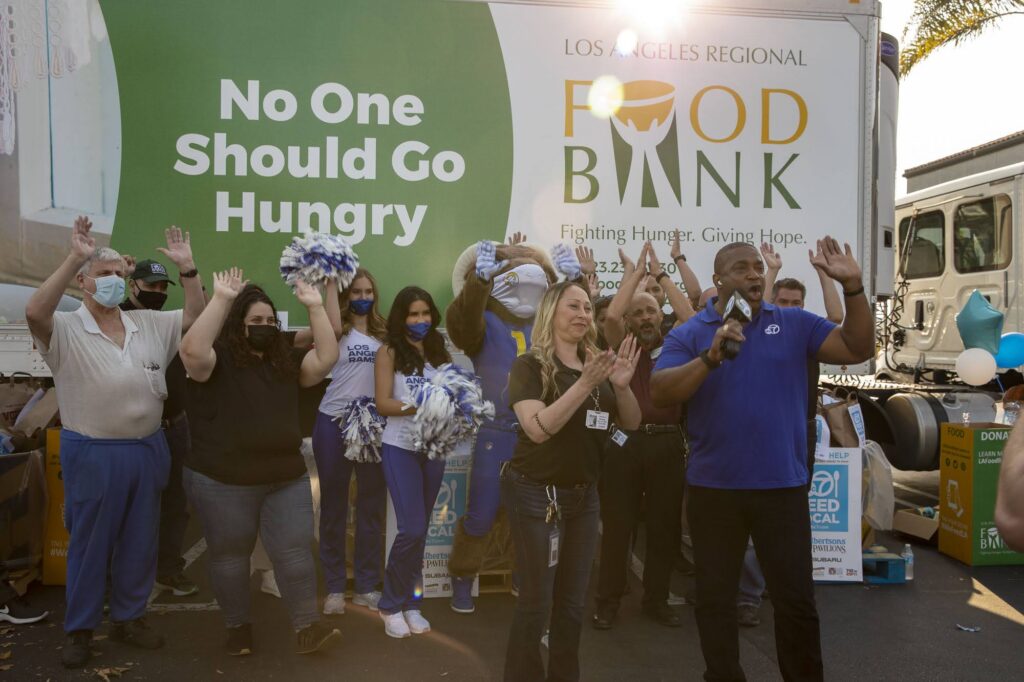 The 10th Annual hunger initiative returned this year, albeit scaled-down, in an effort to raise awareness and funds for summer child hunger in LA County. 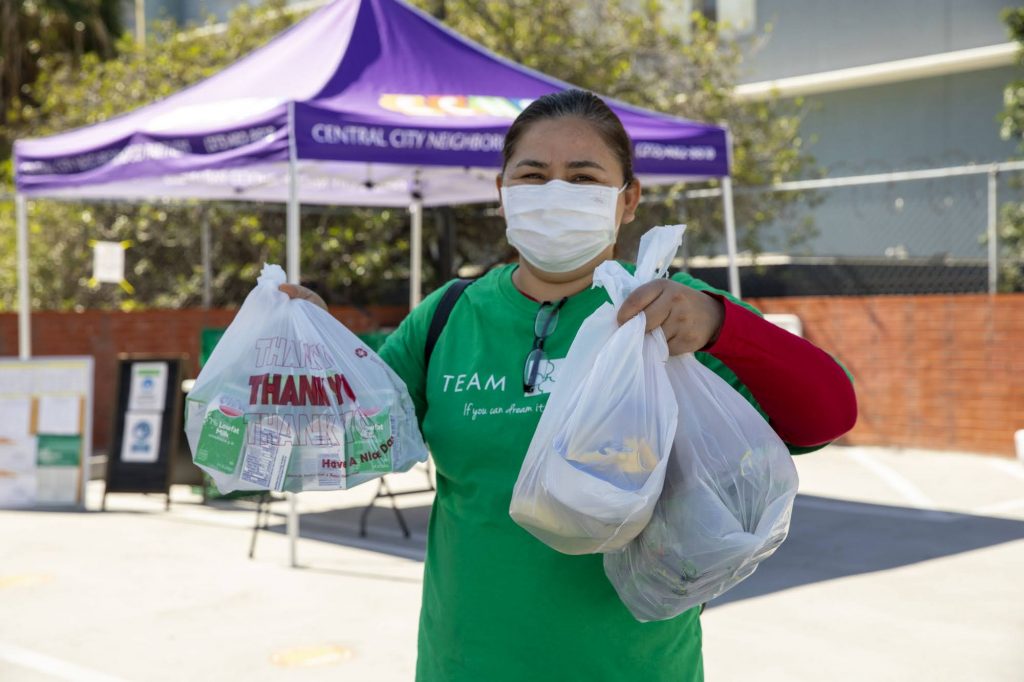 When the pandemic hit, the question of whether Patricia and her family of five would have food on their table began to linger. She and her husband had lost their jobs, and with three young children at home, she needed to find a way to find their next meal. 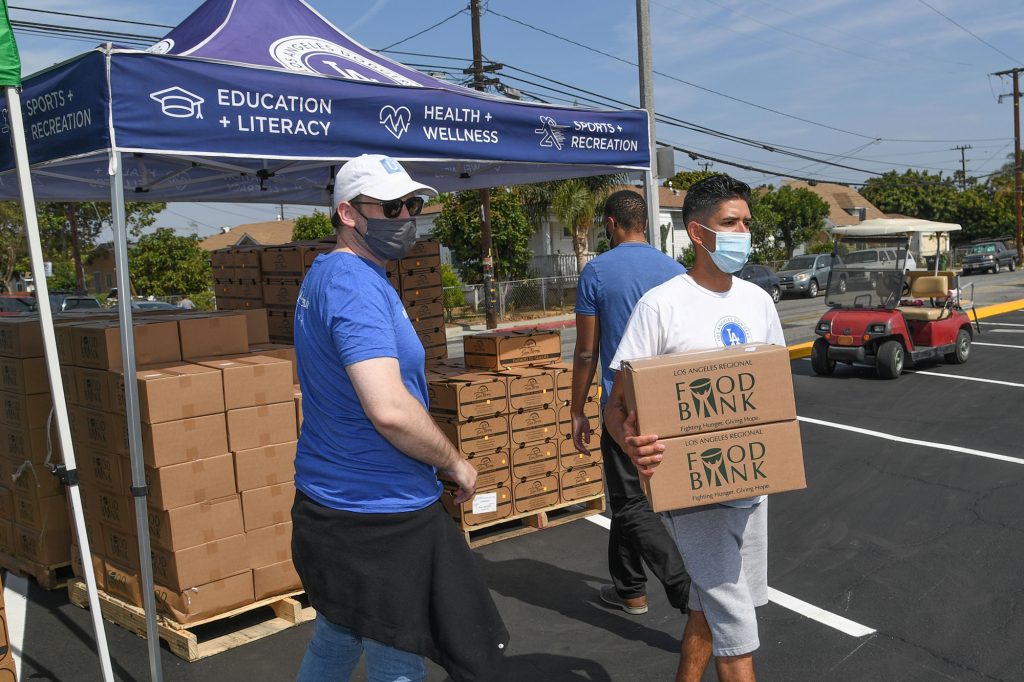 Thanks to an awarded grant of $725,000 from LADF, the LA Regional Food Bank was able to provide 2.9 million meals to those in need.