Inside the College Hunger Crisis

Inside the College Hunger Crisis

At a recent Mobile Food Pantry distribution, a student at Citrus College explained how tough it can be to face food insecurity. Matthew is studying biology and is going into pre-med. Like many of his classmates, he would like to create a future for himself where he doesn’t need food assistance.

Matthew works part-time and attends school part-time, and is worried that without food assistance, he’d have to drop out and work full-time in order to survive. Because he knows that dropping out would likely keep him in a lower income bracket, he’d rather finish school so that he can earn higher wages in the future. The Food Bank’s Mobile Food Pantry allows Matthew to attend his classes without worrying about his next healthy meal.

The LA Regional Food Bank’s Mobile Food Pantry is on the front lines of hunger relief, distributing directly to clients who have unreliable or insufficient access to adequate food. It is an invaluable resource on college campuses, but also in low-income communities without reasonable access to a traditional food pantry.

Dunia Valladares, Basic Needs Coordinator for Citrus College, said that roughly 200 people come through the Mobile Food Pantry line at each distribution, including students, and sometimes other members of the community who face food insecurity.

“Many students come to me telling me how helpful this program is,” she said. “We welcome student volunteers, and a lot of them are themselves in need, so they will go through the Mobile Food Pantry line and get some food.” 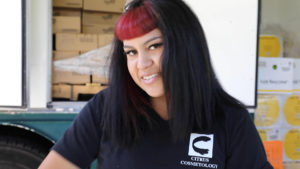 Students from a cosmetology class were volunteering on this particular day. Recognizing that hunger is an issue on many college campuses, including Citrus College, the students were happy to volunteer. Victoria Peña, a student volunteer, said, “what people don’t understand is how hard it really is to actually get food sometimes.” 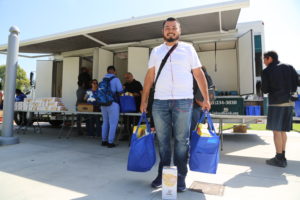 Sponsor a Mobile Food Pantry distribution and bring food to those who need it most.