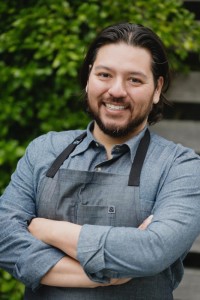 As a native Angeleno, Ray Garcia draws his culinary inspiration from the city’s rich culture, Southern California’s produce, and his classic training. As chef/owner of Broken Spanish and BS Taqueria (both opened in 2015), he incorporates all of these things cooking bright, bold, and ingredient-driven food that expresses a Mexican-American narrative. For this, he, his team and both restaurants have received national recognition and overwhelming hometown support–in a city that has finally drawn critical focus and praise on an international level. Most notably, he was recognized by Esquire magazine as Chef of the Year.

Garcia originally set out to become a lawyer. However, after graduating from UCLA with degrees in political science and business economics, he paved a new path by enrolling at the California School of Culinary Arts. His first job was at the Peninsula Beverly Hills, a five-star and five-diamond hotel with a revered fine dining program. He would further his training with and seek mentorship from chefs like Douglas Keane of Cyrus. During this time, restraint in technique and a deep respect for the integrity of his ingredients became intrinsic, no more evident than from his six-year tenure at FIG in Santa Monica.
He has been consistently recognized for philosophies on environmental stewardship, and commitment to responsible farming and food production, honored with StarChefs “Rising Star” Award for Sustainability in 2010. In 2014, Ray took home the title of “King of Porc” at Cochon 555, an event celebrating the heritage breed pig.

In 2013, Jonathan Gold wrote in the Los Angeles Times, “If you could design a perfect chef for Los Angeles, he might seem a lot like Ray Garcia, an Eastside guy who seems to spend almost as much time proselytizing for healthful eating in local schools as he does in the kitchen. Garcia’s menu manages to be satisfying to both the transgressive big-meat guys and the Gaia-conscious vegans; the carb-lovers and the gluten-free.”

Broken Spanish is Garcia’s flagship where he translates a robust menu, showcasing preparations rooted in long-established traditions refined with a modern sensibility. Since it opened in June of 2015, Broken Spanish has earned countless accolades and recognition as one of the best new restaurants of the year by Esquire, USA Today, LA Weekly, Los Angeles Times and Los Angeles Magazine.

The critical success of BS Taqueria, considered the little sister to Broken Spanish, underscores Garcia’s contribution to a burgeoning dining scene in Los Angeles. The taqueria concept provides a relevant opportunity to elevate Mexican cuisine, reinforcing the ideology that ethnic food should not automatically be relegated into a particular price bracket. Without proselytizing, Garcia hopes to usher in a new understanding and appreciation for Mexican food with quality sourcing and precision cooking.