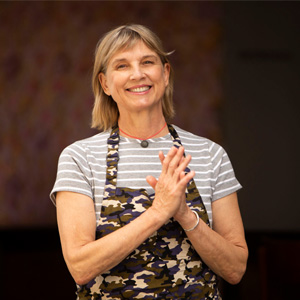 After graduating from Washburne Culinary Institute in Chicago, Milliken worked her way up and became the first female chef at Le Perroquet in 1978—where she soon met Susan Feniger. Following, she cooked at the woman-owned, two-Michelin-star Restaurant D’Olympe in Paris, before rejoining Feniger in L.A. to launch City Café in 1981, applying French techniques to traditional dishes from around the world. The culinary pair found further acclaim with CITY Restaurant in 1985 and captured the hearts of Angelenos with Border Grill’s ’85 debut. Winning the James Beard Award in 1985 was the first of many honors including lifetime achievement awards from Women Chefs and Restaurateurs, CA Restaurant Association, and Menu Masters Hall of Fame. Most recently, Mary Sue was the recipient of the Los Angeles Times’ annual Gold Award and the Julia Child Award.

Mary Sue has co-authored five cookbooks, co-starred in nearly 400 episodes of the Food Network’s “Too Hot Tamales,” and co-hosted a food-centered radio show for over a decade in Los Angeles. She competed on season three of Bravo’s “Top Chef Masters,” winning $40,000 for her charity, Share Our Strength, which aims to end childhood hunger in America. Mary Sue has served as a fundraiser and advocate of Share Our Strength since 1987 and also serves on the Board of Trustees for the James Beard Foundation. In 1993, she joined a handful of colleagues to create two organizations: Women Chefs & Restaurateurs, an organization promoting women’s education and advancement in the restaurant industry; and Chefs Collaborative whose mission is to inspire, educate, and celebrate chefs and food professionals building a better food system. Most recently, she co-founded Regarding Her, a non-profit to provide women-owned restaurants in LA county business grants, mentorship and resources in response to Covid’s crippling effect on the industry. Additionally, Mary Sue served the U. S. State Department as a member of the American Chef Corps, working in Pakistan, Morocco, Jordan, the U.K., India, Malta and Italy to promote diplomacy through food. She is passionate about food policy, working alongside the Monterey Bay Aquarium as a member of the Blue Ribbon Task Force, a panel of culinary leaders committed to innovative outreach to promote sustainable seafood, LA Food Policy Council, Pew Charitable Trusts, Oxfam, and others to help shape sustainable food systems.