The Los Angeles Regional Food Bank raised more than $400,000 to help feed people in need at its 16th annual Season for Sharing Luncheon on December 13, 2018. The event, which celebrated Food Bank’s 45 years of service to the community, was held at the Omni Los Angeles Hotel. The Food Bank honored donors, individuals and other organizations that have made major contributions to the fight against hunger in Los Angeles County.

Leslie Lopez, meteorologist for ABC7 Eyewitness News, emceed the event and tweeted afterward saying, “It was a privilege emceeing again this year at the Los Angeles Regional Food Bank’s Season of Sharing Luncheon. I should have brought a box of tissues – hunger in our community is heart-wrenching.”

President and CEO of the Los Angeles Regional Food Bank, Michael Flood commented, “We truly appreciate all of the sponsors of the luncheon. The Food Bank has fed people for 45 years because of the tremendous, generous support of individuals, corporations and foundations who share our vision that no one goes hungry in Los Angeles County.”

Friends In Deed was awarded the Community Partner Award for going above and beyond in serving the most vulnerable in our community. Friends In Deed is a longtime partner of the Food Bank whose mission is to alleviate the effects of poverty, to encourage self-sufficiency through the collective efforts of congregations, individuals and community organizations and to promote mutual support, understanding and collaboration within the faith community.

The Fighting Hunger, Giving Hope award was presented to Starbucks for their FoodShare program – a national program of which mobilizes unsold, high-quality and nutritious food from Starbucks locations to our neighbors in need. Los Angeles County is one of the largest areas where this program has been implemented. Sean Williams, Regional Director at Starbucks said, “Starbucks intends to scale this program by 2020 and rescue 100 percent of its food available for donation from participating company-operated U.S. stores.” The program is designed to be scalable and replicable, allowing even non-Starbucks organizations to replicate the program and provide for those in need by rescuing perfectly good food that would otherwise go to waste.

The Tony Collier Award, named after the founder of the Food Bank, is awarded annually to a partner that exemplifies the shared mission and the vision that no one goes hungry in Los Angeles County. This year, the Tony Collier Award was awarded to Elena Guzman who retired this year from her Site Supervisor role at the Catholic Charities San Juan Diego Center in El Monte. Those who know her best say that Elena treated her clients with love and respect, more like family than clients. She would often go the extra mile to acquire fresh produce from the Food Bank, and encouraged people to try new healthy foods.

Richard Fung, who has served on the Food Bank’s board since 2013, was presented with the Dennis Winston Memorial Leadership Award. Fung has been integral in organizing events and volunteer activities and is also a generous financial supporter of the Food Bank. This award is named after a longtime friend, supporter and Board of Directors Chair Dennis Winston.

For sponsorship information or questions about the luncheon, please contact:
Roger Castle at rcastle@lafoodbank.org or (323) 234-3030 ext. 147. 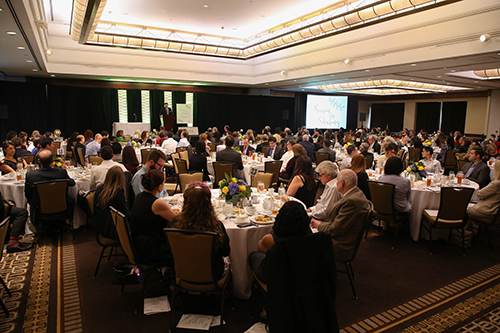 Our Season for Sharing Luncheon serves to thank our community partners for taking action in the effort to alleviate hunger throughout Los Angeles County. We are sincerely grateful for their leadership, dedication and generosity. By contributing their time and resources, our partners shine a spotlight on the fact that everyone can do something to fight hunger.